Showing posts from December, 2017
Show All

River Rule by Ameeta Davis My rating: 2 of 5 stars Paranormal romance is the new normal. The Twilight series threw up many followers. This book is one of those. There is a girl named Una who comes to India with her father they go to a spooky place called Khamosh Valley. There all kinds of weird things happen. On the way she has premonition that her driver died and they somehow escaped. When they reach their grandfather doesn’t open the gates and they have to climb over the boundary wall. There she meets Avi. There is some mumbo jumbo about tribals and their land rights. Then humans become beast and then I lost rack. The book is very contorted and confused. I could not make out head or tail of it. There is zero character development and no clear motives of anyone. Dev and Major are most confused characters. Una and Avi are irritating. Totally disappointing. 2/ 5 stars. View all my reviews
Post a Comment
Read more
- December 28, 2017 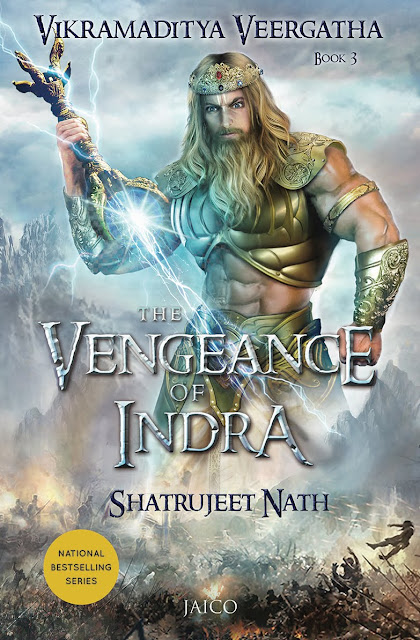 ~ Cover Reveal ~ The Vengeance of Indra  (Vikramaditya Veergatha #3) by Shatrujeet Nath VENGEANCE IS A CAGE FORGIVENESS IS FREEDOM In their greed to possess the deadly Halahala, the devas and the asuras have employed every dirty trick against Vikramaditya and his Council of Nine. But the humans are still standing, bloodied but unbowed. When the wily Shukracharya discovers the secret to breaking the Council’s strength and unity, he forges an unlikely alliance with his arch-enemy, Indra, to set a deceitful plan in motion. As cracks emerge between the councilors and their king, ghosts from the past threaten to ruin Vikramaditya and Kalidasa’s friendship, signaling the beginning of an eclipse that will cast a long shadow over all that Vikramaditya holds dear. And into this shadow steps Indra, bearing an old grudge — and a devastating new weapon. How much longer before the Guardians of the Halahala finally fall apart? Other Books in the Series:   (Clic
Post a Comment
Read more

Review: Pinto Has An Idea

Pinto Has An Idea by Rajeev Saxena My rating: 3 of 5 stars A scientist can be a jack of all trade. Rajat is one of them. Is science answer to all our questions? Rajat Srivastava aka Pinto (Short of Pintoo) is a scientist, politician, social worker, husband and father. He is brilliant from birth and despite studying in small towns like Orai he has keen knowledge of science. He goes to USA and then come back. Why? To serve the motherland. He does inventions for business and social service both. Then he is appalled by the corruption and starts a party. His wife doesn’t like it. What happens next? The book is written in plain and simple English. This reads like a series of disjointed incidents. It has some good insights like “Education is good but also make you coward”. “Make point system for VVIPs. Reward and punishment should be proportionate.” (It has a wrong assumption that all VVIPs will be tried for crimes in future.) It was a plain story and had j
Post a Comment
Read more

Review: Come Back to Leave Me... Again

Come Back to Leave Me... Again by Sohil Ashvin Shah My rating: 3 of 5 stars What is the meaning of love for today’s generation? It is WhatsApp chat and FB likes. This book is like a long chat. Siddhant (read Sohil or whatever you like) is working in Dubai. He is from Ahmedabad, Gujarat and has fantasies about love. He meets Ritisha with a H and falls for her head over heels. Hey start chatting and come close. Then he meets many girls for marriage. Then Ritisha grow apart. And it goes on…. This book is for teenagers. Language is kind of free for all. It’s a mix of Hindi, English and Gujarati. It is very confused about notion of love answers to question at back cover are flimsy. View all my reviews
Post a Comment
Read more

Review: Different Beads of the Same String : A collection of Short Stories

Different Beads of the Same String : A collection of Short Stories by Sujay Malik My rating: 4 of 5 stars Anthology has an advantage of covering a lot of ground in one book. This book is a mixed bag like most anthologies. Anahita found her mentor in an old professor. As sometimes happens she feels attraction but he has his own past. Swini, a Hindu loves a Muslim boy and the cant marry. Michelle finds that Indian kids are as pathetic in taking care of their parents as Americans. Feelijus is one good lesson about justice delayed is justice denied. The stories are shorts, sweet and relatable though the themes and plots are old. 4/5 stars. View all my reviews
Post a Comment
Read more

Review: Where's the good in a goodbye

Where's the good in a goodbye by Ravi Shirurkar My rating: 3 of 5 stars When two lovers meet their lives change. Change may be positive or negative. Jesper and Sara had positive influence on each other whereas Arjun and Eva had mixed results. The book is just average and had so many pop psycology quotes in italics. It breaks the flow and is irritating. Sometimes it is just plain regressive and sexist. See this passage (Arjun telling Eva that kissing her boyfriend is cheap): Your friends know that I proposed you but they don’t know you kissed me in the middle of the street – 4 blocks away from your home. How cheap does this sound? Money is overrated and this book reinforces this notion, see the passage below: So how do people like Virat and Elon become so irresistible all of a sudden? The answer is M-word! The M-word is not some Magic but it’s MONEY! One should just take care of his M-word, and M-word takes care of the rest of the things. 2.5/ 5 s
Post a Comment
Read more

Kartikeya: The Destroyer's Son by Anuja Chandramouli My rating: 5 of 5 stars “He who fights with monsters should look to it that he himself does not become a monster . . . when you gaze long into the abyss the abyss also gazes into you” ― Friedrich Nietzsche The eternal fight of good and evil is not all black and white. This is my second book of Anuja. First one was “Shakti, The Divine feminine”. I see some common themes in her two books though I am writing about “Kartikeya” here. The story of Kartikeya is not very well known in north India from where I belong. Ganesh is more popular elder son of Shiva in these quarters. Though in south India Kartikeya (aka Murugan in Tamil Nadu) is worshipped with fervour. This books says that Karti is elder. Indra is petrified to death due to rising power of Soora and his brothers Simha and Taraka. The rotten manipulator as he is, he approaches Vishnu for help. This is what he always does. It is foretold that S
Post a Comment
Read more

Interview of Anuja Chamdramouli (Author of "Kartikeya: The Destroyer's Son”)

- December 07, 2017
I had recently read the phenomenal book “ Kartikeya: The Destroyer's Son” . I asked some questions to extremely talented Ms Anuja Chandramouli. She graciously and kindly granted me her valuable time from extremely busy schedule. This may throw some light on her thinking process for those who are keen to know. Brief bio as taken from Goodreads.com Anuja Chandramouli is a bestselling Indian author and New Age Indian Classicist. Her highly acclaimed debut novel, Arjuna: Saga of a Pandava Warrior-Prince, was named by Amazon India as one of the top 5 books in the Indian Writing category for the year 2013. Kamadeva: The God of Desire and Shakti: The Divine Feminine are her other bestsellers. Currently all three books are being translated into Hindi, Marathi, Gujarathi and Bengali, a real achievement for one so young. Her epic fantasies called Yama’s Lieutenant and its sequel has received an overwhelming response. Her newest books are on Kartikeya, Padmavati and Prithviraj Chau
Post a Comment
Read more

Zero Debt: Break the Debt Cycle and Reclaim Your Life by Neeraj Deginal My rating: 3 of 5 stars Indian kids don’t understand finance till they marry. Till the time they are in college they are provided money by their parents and they don’t know how to manage it. Even after getting ot of college they do not handle and the parents usually do this for them. So naturally we are not very wise in making decisions regarding money management. The same thing happened with our author Sh Neeraj Denigal. He married and incurred a lot of debt. He had three credit cards, 3 housing loans and one car loan. This became so stressful that he had a nervous breakdown. Then he managed his finances better and became debt free and stress free. The book give tips about managing finances, time, health, work life balance and nost importantly valuing the things which matter. However the way author paid his loan after taking interest free loans from his elder brother is not a pa
Post a Comment
Read more

A Girl Called Renee by Ruth Uzrad My rating: 3 of 5 stars The persecution of Jews was a sad incident. It ruined many lives. One such girl was Ruth Uzrad who escaped from there to Belgium. Just imagine the horror of two young girls in a train with no identification papers. She is put in an orphanage by a kind woman. Then she goes to France and take a pseudonym Renee. Finally she settles in Israel. It is a book by Ruth Uzrad herself and a moving portrait of trials and tribulations of hers when she runs for her and her sister’s life. View all my reviews
Post a Comment
Read more

Review: You Are Meant To Sing!: 10 Steps to Unlock Your Inner Voice

You Are Meant To Sing!: 10 Steps to Unlock Your Inner Voice by Helane Marie Anderson My rating: 3 of 5 stars The book is of a fighter who suffered from multiple problem in the past. She came over all these and found her voice. She suffered from anxiety, depression, PTSD etc and was afraid to show her talent. Her mother also dissuaded her to follow her dreams and advised to take the safe path. But she found the voice within her overpowering and then broke her shackles. Ultimately music is the cure for all her problems. It has to come from your soul and you have to follow your dreams. That is the message. View all my reviews
Post a Comment
Read more

Dharmayoddha Kalki: Avatar Of Vishnu by Kevin Missal My rating: 4 of 5 stars Lord Vishnu is the operator of universes. He comes to earth in human form when there is extreme evil to finish it off. There are four Yugs. Lord Vishnu incarnated as Ram in Treata Yug and Krishna in Dwapar. It is prophesied that he will be born as Kalki in Kaliyuga i.e. the present age. This is story of eternal battle between good and evil represented by Kalki and Kali respectively. Kalki is son of Vishnuyath and younger brother of Arjan. He is a simple village boy having amazing strength. Kali along with his sister Drukuti wants to establish an empire. Only hurdle in his path is Kalki. The author has given a note in the beginning itself that this is a fantasy and not a modern retelling of Kalki Purana (I didn’t know there was a book like that Wikipedia link https://en.wikipedia.org/wiki/Kalki_P... ). The influences are many from GOT, star wars, LOTR and Bahubali. He wanted
Post a Comment
Read more
More posts