Showing posts from January, 2018
Show All

The Yellow Wallpaper by Charlotte Perkins Gilman My rating: 5 of 5 stars The story is written around 1890. The awareness about depression must not be there at that time. It is a short story of a new mother who is battling Postpartum depression. Wikipedia defines it as such: "Postpartum depression (PPD), also called postnatal depression, is a type of mood disorder associated with childbirth, which can affect both sexes. Symptoms may include extreme sadness, low energy, anxiety, crying episodes, irritability, and changes in sleeping or eating patterns. Onset is typically between one week and one month following childbirth. PPD can also negatively affect the person's child." The couple shifts to an abandoned country house for three weeks after birth of their daughter. The man of house is a physician and have some understanding of depression. The story is told in first person. The woman is depressed but as it happens she doesn't know it
Post a Comment
Read more

Rani Padmavati: The Burning Queen by Anuja Chandramouli My rating: 3 of 5 stars “I believe that imagination is stronger than knowledge. That myth is more potent than history. That dreams are more powerful than facts. That hope always triumphs over experience. That laughter is the only cure for grief. And I believe that love is stronger than death.” ― Robert Fulghum, All I Really Need to Know I Learned in Kindergarten: Uncommon Thoughts on Common Things Padmavati aka Padmini is not a historical figure. There is no historical account which proves that any such queen existed. This is a part of popular folklore of Rajasthan though. The name of Padmavati is found in the book called “Padmavat” written by a Muslim poet Malik Mohammed Jayasi. But myth or reality doesn’t matter when the issue is of faith. Sometimes myths are more powerful than reality. Because they give us courage and hope. Padamavati is a symbol of resistance against barbaric Muslims and dev
Post a Comment
Read more

Mysterious 4:30 a.m. by Nitin Sharma My rating: 3 of 5 stars I am not telling that love is life but without LOVE there is no life….. It is a true story of two lovers, Shilpi Sanghi and Harshvardhan Singhania as told by Nitin Sharma in the introduction. Romance is the staple diet of novels and movies. This book is no different. Harsh is very rich but wants to make big on his own. He is a loner and hates the lustful behaviour of his fellow students. He believes that true love is pure and dedicated. Then he goes to college and meets Shilpi. Shilpi is from a very traditional, rich and backward looking family who don’t believe in giving freedom to girls. They come close and what happens next… The book is simple and predictable. There is no novelty and the same love story is repeated (though there is not much scope in love stories). There is a rape scene also which is very grotesque. The book is a onetime read for romance lovers. 3/ 5 stars. ‘
Post a Comment
Read more 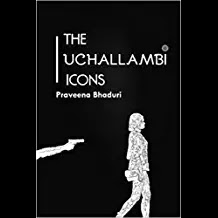 A good thriller should keep you guessing and on the edge. Like a James Bond movie it should be international. Praveena Bhaduri keeps doing that throughout and much more is in store. She describes the locales, situations and emotions beautifully. There are three best friends – Anushka, Pia and Deepti. And one mysterious fellow who calls him ‘MAndravad’ (actually Bikrama Singhe A Govt servant) who also deals in antiques. Three idols called the Uchallambi icons (hence the name of novel) are stolen which are priceless. But the thieves don’t know their true value and takes them to Kenya and sell them to Pia and dirt price. The three friends come back to Bombay and decide that these seem precious so each girl keeps one idol. Then begins a cat and mouse game between these girls and the goons. And meanwhile there is romance also. The book works very well for a thriller and Praveena describes the locales and situations in vivid details. The editing and choice of words is top
Post a Comment
Read more

The Blue Jinx by Nisha B. Thakur My rating: 3 of 5 stars Are ghosts real? Or for that matter gemology or astrology? Do the Ghosts try to avenge themselves if something bad happened to them? It may be psychological issue or may be real ghost (if there is such a thing). Nikhil is a loser in the eyes of his family. He is an interior consultant and wants to make it big. He gets an opportunity to refurbish Hemant’s Bungalow, far away from Mumbai. He always claimed that he is not cut out for love and wants to focus only on career. But as happens in stories he falls head over heels for Samara, Hemant’s beautiful daughter. Bhima, the Chowkidar tells him that the Ghost of Shanipriya (Samara mother) is there, in the same room where he is staying. Then strange things start happening with him and he loses control over reality. The story is good initially and builds the suspense and atmosphere beautifully. It is fast paced book and can be finished in one or two s
Post a Comment
Read more
More posts