Showing posts from June, 2018
Show All

The Blue Moon Day: Five Men's Magical Discovery enroute Life by Santhosh Sivaraj My rating: 3 of 5 stars Everyone wants to be happy. But what is true happiness only a few knows. Even if they know they chase other things. We want happiness but we do things which are not related to it. There are many self help books and it is one of them. This is in fictional format though. The message is given through five stories. Sankaran goes to an old age home but his true calling is stories. Vivi is trapped in a job and then he is physically trapped. Abi (Abhinav) is ashamed because of his fat and he kept on studying. His real calling was food. Deepak and Priya marry and then grow apart. Prabha has a terminal disease. A mysterious Stanger comes in their lives and teach them how to find true happiness. The book has some beautiful messages like: 1. Once the body starts to feel the emotions, it starts to dictate life decisions. 2. Ordinary people in extraordinar
Post a Comment
Read more

Tikri’s Fiasco by Rishav My rating: 2 of 5 stars Blurb A story to honour the oblivious individuals who live a life of shadow. Tikris' Fiasco is a story about an imaginary world that comprises of Kasht Desert and a small island, the Seculars. Tikran, a prominent country on the lands of Kasht that comprised of Tikri tribe, has spread terrorism throughout and plans to destroy large parts of the Kasht with help of a small neighboring country, Alistan. Other two prominent countries in the Kasht Desert, the Briewsel and the Sindhustan align together to destroy Tikran's plan. The story is about the combined workings of different spying agencies of the Kasht and would take you on a roller coaster of events that eventually defeat the Tikris' plan. Review The book tells story of imaginary countries but by name and there deeds we can find out which is which. I found that unnecessary because it took out the please out of reading. Instead the author s
Post a Comment
Read more

Checkmate by Varun T. My rating: 3 of 5 stars According to Oxford dictionary Checkmate is “A position in which a player's king is directly attacked by an opponent's piece or pawn and has no possible move to escape the check. The attacking player thus wins the game.” This is the second book of author which I read. First was the “The last chai”. This is markedly better than the last one. The characters are repeated from the last book and some are new additions. Though it is not necessary to read the book in order but it is recommended. The story moves far and wide n the globe. India, china, USA, Israel, middle east, Japan, North Korea etc all are involved in in capacity or other. USA and North Korea are on a brink of a nuclear war. Dalai Lama, supreme leader of Tibet has endorsed China and this is a huge setback to India. How will the Indian PM, Doshi tackle this? The book has some interesting theories and details of espionage and media. The ex
Post a Comment
Read more

The Coin by Sandeep Sharma My rating: 3 of 5 stars Blurb of the book: “Who likes Sudden death?” That's the only question he used to ask before killing his prey. Random people are being abducted from the capital city, Delhi and are being killed mercilessly. Before killing, the murderer is reciting them a story, a story about a 9-year-old child who saw the brutal side of the world at a very young age. All the stories are being recorded for the Police department to see. Raunak Upadhyay, the Police inspector who is handling the case, links the style of serial killing to the case he solved years ago. But the murderer of that case is in jail then who is following the footsteps? Does the murderer want to convey something? Whose story is being recited? Why is the murderer taking personal interest in Raunak? Is there any other side of this coin or both the faces are just the same? Welcome to the Brutal world! Review: “Silence of the lambs” inspired many
Post a Comment
Read more

Interview of Radhika Nathan author of “A time to Burnish” 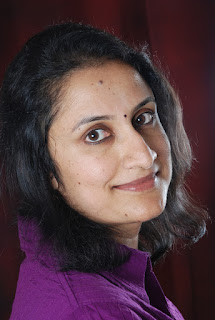 A brief bio of Radhika taken from Goodreads: Radhika Nathan is a juggler, a meanderer and a rolling stone. She believes in the miracle of words and the rain. Her favourite pastimes include reading, listening to podcasts and gazing at monsoon clouds. Her taste in books is eclectic ranging from anthropology to old fashioned murder mysteries, and if pushed she would name Jane Austen as her favourite author for her believable, eternal characters. Travel is something she enjoys and has been to more than a dozen countries- for the love of meeting new people and discovering new cultures.  Radhika writes for her fascination of human beings, intrigued by their archetypal & atypical behaviour and the differences & similarities in all of us. Writing is a means that forces her to think and re-examine a point of view or a preconceived notion. ‘I grow as a person as I write’, she says and quotes ‘A well written sentence [a rare occurrence] is like soul chocolate.   Radhika
Post a Comment
Read more
More posts