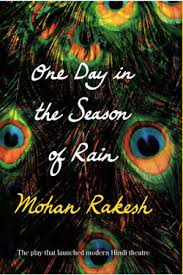 Ashadh Ka Ek Din (Hindi: आषाढ़ का एक दिन, One Day in the season of rain) is a debut Hindi play by Mohan Rakesh in 1958. Since the month of Ashadh (beginning on 22 June and ending on 22 July) is usually the onset period of the monsoon in North India, the name can be understood to mean One day during the Monsoon. The title of the play derives from the opening line of the Sanskrit dramatist Kalidas's play Meghadūta (Sanskrit: मेघदूत literally "cloud (Megh) messenger (Doot)").

The play is divided into three acts.

The love of poet Kalidas and Mallika is not approved by Mallika's mother, Ambika. At this time, Kalidas has composed his first long poem Ritusambar. He wins recognition in the court of Ujjaini and the king has sent his horsemen to bring him. Another villager by the name of Vilom (also interested in Mallika) says that if Kalidas leaves for Ujjaini, he must take Mallika along. Kalidas, however, does not wish to go from the mountain-valley where they all stay. Finally, Mallika persuades him to leave.

A few years have passed. Kalidas, a great poet now, is passing through his native valley with his queen Priyagumanjari on his way to Kashmir. The queen meets Mallika. Kalidas, however, does not visit them. Mallika's mother is not surprised. Vilom is.

Mallika's mother (Ambika) has died. Mallika has given in to Vilom and she has a child by him. Just then Kalidas returns. He finds that the life of Mallika, the drunkard Vilom, and the child is complete without him. After an explanation of his own life and an encounter with Vilom, he leaves the palce, while Mallika goes in to attend the crying child.

The main lead character of the story is Malika. Are you surprised that it is not Kalidas? But Mallika is the heart and soul of the story. She gives up everything even her love for Kalidasa so that he becomes successful. She is his inspiration. She shows how true love should be. Maillka’s love is inspiring, unquestioning, devoted, sacrificing and she ask nothing in return.

Even though Kalidas marries queen Priyangumanjari, Mallika remians  his only love and inspiration. Kalidas Says to Mallika

“The backdrop of Kumarshambhav is this Himalaya and the ascetic Uma is you. The pain of Yaksha of Meghdoot is my pain and the the bruised by separation Yakshini is you- even though I imagined myself here and you in the city. Only you were in front of me as Shakuntala of “Abhigyan Shakuntalam”.

Mallika is the epitome of love. She is a metaphor of true love.

Kalidasa is neither good nor bad. He is extremely talented but he is afraid and a coward. In village he vows never to marry and on that pretext he does not marry Mallika. He is called to Ujjaini, but initially he does not go because he is not confident that after seeing poverty how will he behave in affluence. And his fears prove correct. He marries Priyangumanjri and becomes King of Kashmir. But he is never able to forget Mallika. Finally when he come again to her she is married with a kid. Then he says

“Kalidas: I said I wanted to start over. This was the fight between desire and time. But now is see that time is much more powerful because…
Mallika : Because?
Kalidas: Because it does not wait.”

Such a profound truth. Time waits for no one. Not even for the great poet Kalidasa.

Vilom seems to be a villain on surface but he is not. He is s metaphor of an average person who lacks talent and thus he is bitter. Because of this bitterness he says things to hurt others whereas talented people like Kalidas camouflage that in fancy words.

Priyangumanjari is a typical upper class spoilt brat who thinks they can buy anything with money. She is arrogant, well read and bred and feels Mallika is a threat. She unsuccessfully tries to bribe her and marry her off to her servants.

Matul and Ambika are elders who have betterment of their wards in heart and think they know better.

Rangini and Sngini and Anuswar and Anunasik provide comic relief and also they are a caricature of pseudo intellectual middle class society and typical red tapism.

Use of Imagery, Symbols, Metaphors

This is a must read for literature lovers. Mohan Rakesh evokes powerful imagery.

Rainy day means some tragedy is about to arrive.
Entry of Ambika with lightning shows terror.
The fading voice of Kalidasa foot beautifully shows that Mallika and he can never unite.

Sample this powerful imagery of a crying baby which shows they can never unite;

Kalidas: Life is still left. We can start over.
The baby starts crying.
Kalidasa: Mallika!
Mallika looks at him.
Kalidasa: Who is crying?
Mallika: This is my present.

This one sentence says it all. Baby has come and there is no chance left for their union.

The most powerful metaphor is when he describes an epic written by her tears.

Kalidasa: You made these papers by your own hands so that I will create my greatest epic on these.
He flips the papers and then stops
There are water drops at many places which is not rain drops undoubtedly. Apparently you have written so much with your eyes on these blank papers. And not only with eyes, these have become dirty with perspiration at many places, dry flower petals have left their mark at many places. Your nails has pared them at many places, your teeth and bitten. Apart from this color of summer’s sun, paper dust of winter and dampness of this home…..how come these papers are blank now Mallika? An epic has been written on these.

The cruelty of poverty as told by Mallika:

This is a path breaking Hindi play. It is supposed to be a historical romance. But that is oversimplification. It is not a play which glorifies past or dwells just in the emotions of love. It has love, hate, satire, reality, comedy and pretty much everything else.
It is set in an ancient period but it can be set easily in any era. We have memorable characters like Kalidasa, Mallika, Priyangumanjari, Vilom etc all around us. A must read for all those who like quality literature. It has been staged extensively.

The condition of Kalidasa in final act is quiet similar to a gem from Jagjit Singh immortal ghazals written by Majaz Lakhnawi..

بستر-ے-مخمل-و-سنجاب تھی دنیا میری
bistar-e-makhmal-o-sanjaab thee duniya meri
(My life was fixated with the beautiful beds of velvet and fur !) 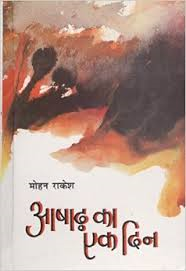 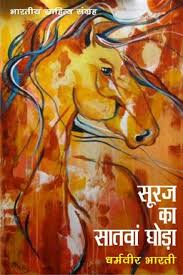